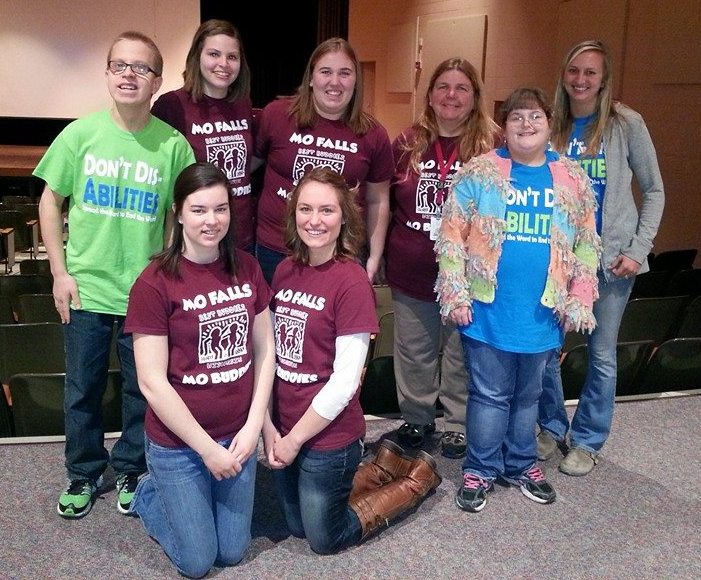 Seniors Emily Suetholz and Morgan Scrobel know that school culture could and should
be improved.
Best Buddies, a club partnering regular education students with those with intellectual
and developmental disabilities, is growing mightily, but it still needed a boost.
“There’s just words that shouldn’t be used n the school that are used too often,” said
Scrobel, president of Best Buddies.
One of those is the “R” word sometimes used to label those with disabilities, now equated
with the racial slur starting with “N.”
Scrobel and Suetholz, the club’s vice president, got an idea to help rid the school of that
term while promoting respect for classmates from a conference in Indiana last summer. They
took their presentation plan to Principal Corey Golla.
“He loved the idea from the start,” Suetholz said.
On Wednesday, national “Spread the word to end the word” day, that idea came to
fruition. Classes each period made their way to the auditorium and heard from Scrobel, Suetholz
and other Best Buddies, and saw a high-quality news clip the club made. The club even sold
shirts to promote the event.
Two pairs of buddies described their friendships and discussed the activities they enjoy
and the fun they have together.
Best Buddies took a calculated risk in an audience participation exercise, asking people to
stand if they ever experienced anxiety, bullying, wore glasses and a host of other conditions.
Suetholz said she worried nobody would get up.
Instead, nobody sat. Groups of students and staff willfully rose as the list went on.
“I think the majority of the room was standing,” Scrobel said.
Club treasurer Elise Hervey said at lunch a girl told her she got teary eyed during the
experience.
Hundreds of students signed the “Spread the Word” banner in the cafeteria, many more
than last year. The difference Best Buddies is making is evident.
“I think it’s great,” said club advisor and Nationally Board Certified teacher Karen
Richie. “I do notice a difference in the climate.”
One key, she said, is the buddies are actually developing friendships rather than the club
serving as a charity.
Best Buddies grew from 18 to 50 students this year, and the club prides itself on
welcoming everyone.
“It’s really a no-judgment zone,” said Hervey.
“This year we made a giant step,” said Scrobel.