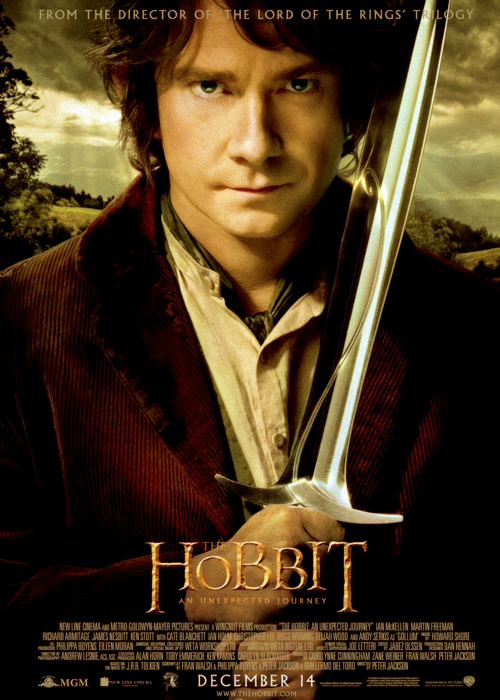 In The Hobbit: An Unexpected Journey, a younger and more reluctant Bilbo Baggins, sets out on an “unexpected journey” to the Lonely Mountain with a spirited group of dwarves to reclaim their stolen home from a dragon named Smaug

This Movie Stars: Martin Freeman as: Bilbo Baggins, Ian McKellen as: Gandalf the Grey, and Richard Armitage as: Thorin

Going into this movie I was hyped. I have been waiting for this movie for 6 years, since I am a Lord of the Rings fan. I was so excited to see Peter Jackson directing it again. And after seeing it, Peter Jackson does a good job directing, but this movie is a massive disappointment. This movie does not have the memorable characters of the Lord of the Rings movies, in fact I can only remember like four of the dwarves, four out of thirteen! This movie is also very slow paced, which, again would be fine if it had memorable characters. The Lord of the Rings trilogy was slow paced, but it had interesting characters to  back it up, this movie does not. This movie also did not know what it wanted to be. I personally have not read The Hobbit, but I have heard from a lot of people that it is more kid friendly than the Lord of the Rings. However, this movie has beheadings, and it is definitely not a kids movie, but then there’s parts with dwarves burping and getting sneezed on which were obviously aimed towards kids, but are just painfully unfunny for the rest of the audience. The Hobbit sounds like it is a very hard book to adapt, however, and you can’t please everyone. Go kid friendly, people will hate it; go more Lord of the Rings themed, people will hate it. So Peter Jackson did a hybrid of the two, which just does not work. You can make a movie kid friendly without having dwarves burping and getting sneezed on. Quick side note, there is a character that you have probably heard people ranting about before named Radagast the Brown, he was just awful, that is all I have to say about him. There is some good to this movie, however. Martin Freeman does an excellent job as Bilbo Baggins, and of course Ian McKellen is fantastic as Gandalf. Richard Armitage was good, but he seemed too much like Aragorn from the Lord of the Rings trilogy. The scene with Gollum was fantastic, I can say that. That scene is pretty much the best scene in the movie. The fact that The Hobbit is going to be a trilogy I think hurt this movie also. I felt like this movie had to be fluffed up way too much in order to be three movies. So, overall, I did not enjoy this movie but you might, and more power to you if you did. 4.1/10